Tel Aviv, Israel – August 17, 2022 – Agtech pioneer, Greeneye Technology, today announces the results of a field trial undertaken by the University of Nebraska-Lincoln’s Agricultural Research Division (ARD) to benchmark the performance of its proprietary AI precision spraying system against broadcast application of herbicides. The results reveal the Greeneye system reduced herbicide use in post-emergence applications by 87% – representing a cost saving to farmers of more than 60% – while achieving the same, or similar, levels of efficacy compared to broadcast spraying.

“We are delighted to announce the results of the UNL field trial, which provide the strongest proof yet of how our precision spraying technology is helping to transform not only farmers’ profitability, but also their productivity,” says Nadav Bocher, CEO, Greeneye Technology.

“Precision spraying has long been a desired concept for farmers. However, while achieving a significant reduction in herbicide use is hugely compelling, cutting costs and reducing volume use of chemicals is not enough to drive mainstream adoption. To provide a truly viable solution for farmers, precision spraying technology must also be able to achieve weed control efficacy on a par with broadcast spraying. The UNL trial proves that the Greeneye system delivers the ultimate combination of savings and efficacy for farmers.”

Today’s announcement coincides with the successful conclusion of Greeneye’s first commercial season in the US. Greeneye is the first company to commercially launch a precision spraying system in the US that is suitable for both pre- and post-emergence spraying. This breakthrough is achieved by a combination of hardware and proprietary artificial intelligence (AI) that can differentiate between crops and  weeds in real time to spray herbicide only where it is needed – directly onto the weeds. Targeted at the aftermarket, the system is designed to seamlessly integrate with any brand or size of commercial sprayer. This offers farmers even greater savings by removing the need for them to purchase a new sprayer.

Reflecting the high demand for its solution from farmers across the US, Greeneye will increase availability of its precision spraying system to more states in 2023. Later this year, it will also launch its technology in South America in partnership with leading Brazilian agricultural producers, Bom Futuro and Natter.

Bocher concludes: “In addition to inflicting intolerable environmental damage, the overuse of herbicides has created a significant financial burden for farmers worldwide. Now, with rising input costs exerting even more pressure on their margins, the situation has become critical. By using the Greeneye system to dramatically reduce herbicide use, farmers  can free up significant capital that can either be added to their bottom line, or used to invest in more efficacious formulations that were not affordable when applied on a broadcast basis, helping to increase crop yields and fight resistance.”

Caption: Image compares the results of the UNL trial 21 days after post-emergence spraying 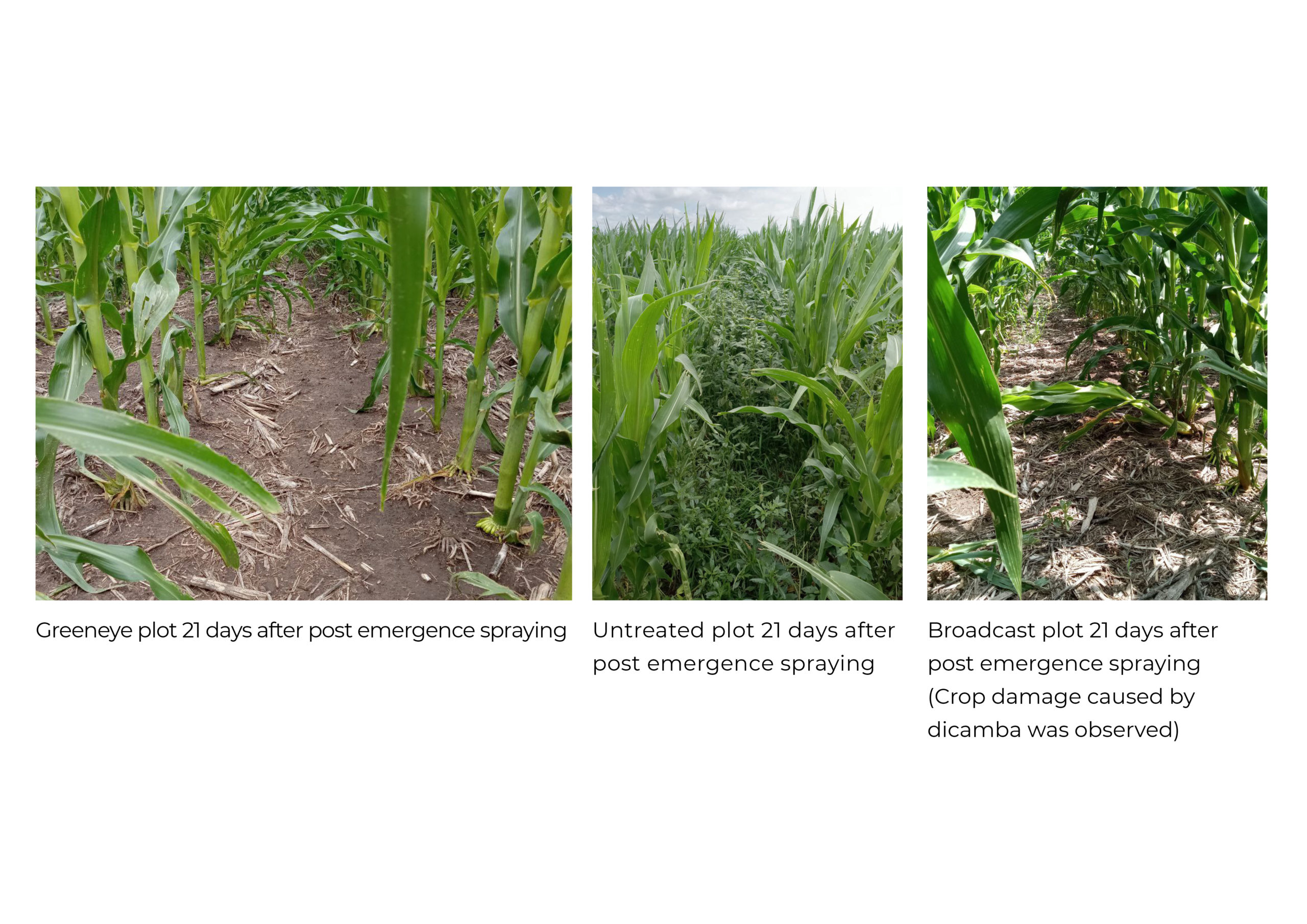 Caption: Image #1 compares effectiveness of Greeneye vs. broadcast on grasses and broadleaf / Image #2 shows reduction in herbicide use with Greeneye system 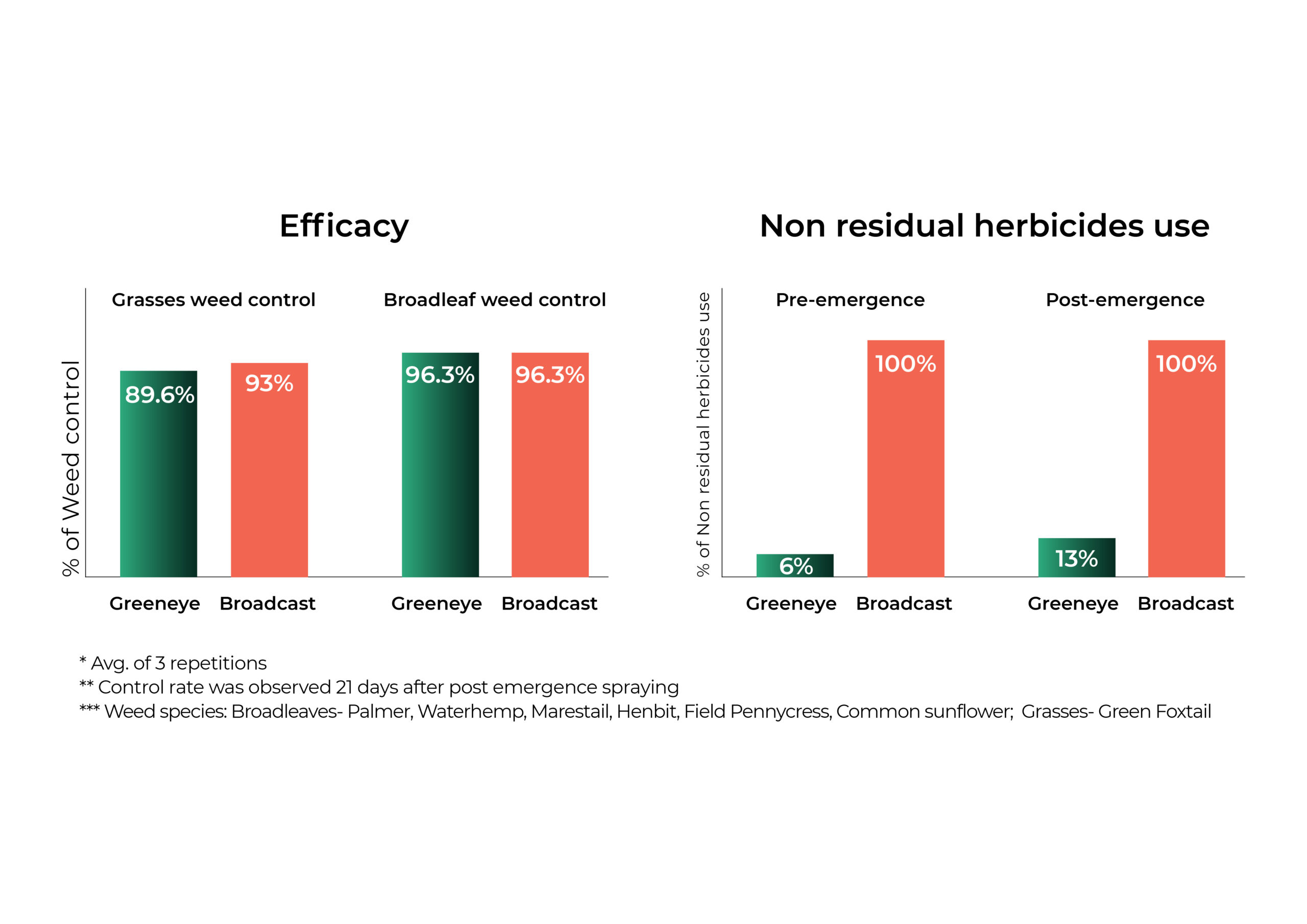 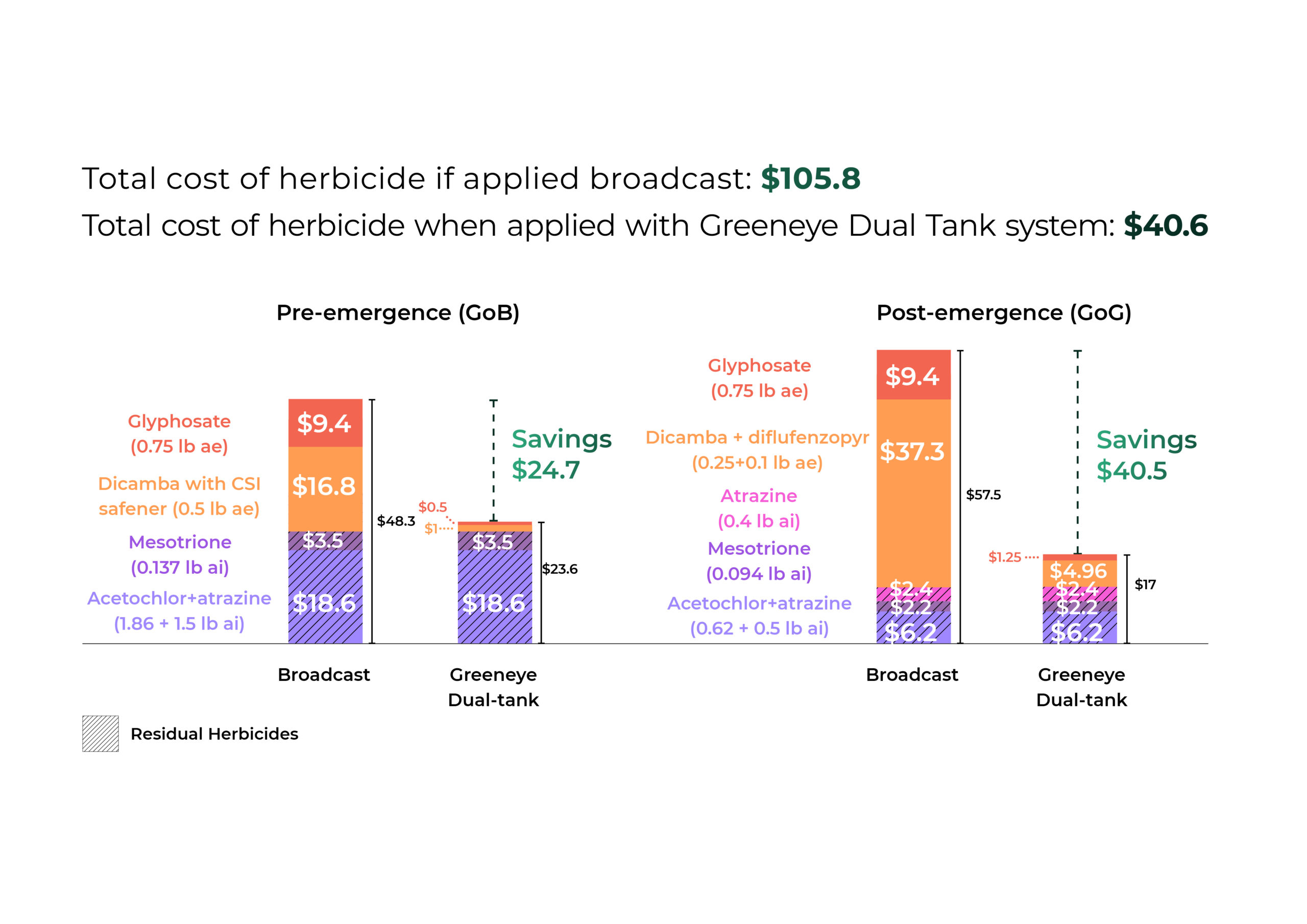 Greeneye Technology was founded in 2017 in Tel Aviv, Israel. Its mission is to develop alternative and sustainable solutions to current crop protection practices that meet the growing global demand for food production, while also increasing productivity and profitability for farmers. The company is pioneering the use of precision spraying technology by harnessing AI and deep machine learning to enable intelligent, real-time decisions in the field that are proven to reduce chemical use by 87% on average. Greeneye has a multidisciplinary team with expertise in computer vision, AI, agronomy, mechanical engineering, and business. In November 2021, the company closed a $22m funding round led by international venture capital firm JVP, KDT and including investment from agriculture industry leaders, Syngenta and AGCO. In April 2022, it announced the commercial launch of its technology in North America, signalling a major milestone in unlocking mainstream adoption of precision spraying by overcoming previous barriers of efficacy, speed of delivery, and cost.